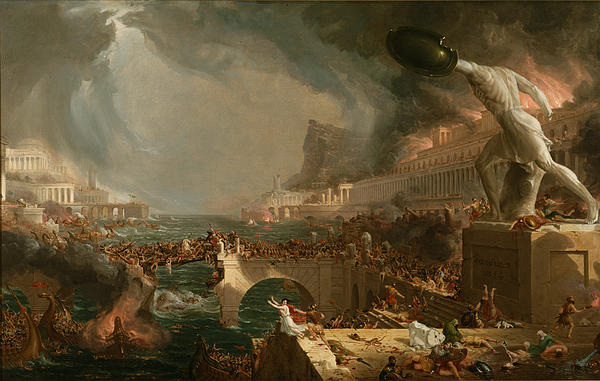 The Course of Empire Destruction Tapestry

This is a reproduction of the fourth of Thomas Cole's five part series, The Course of Empire. This fourth painting, Destruction depicts a landscape... more

Excellent work! I love it! What an inspiration. Your feedback of my artwork would be precious!

Amazing work. I love it! If you have a sec, please let me know what you think about my images. I really want to progress with my knowledge

Thank you so very much.

This is a reproduction of the fourth of Thomas Cole's five part series, The Course of Empire. This fourth painting, "Destruction" depicts a landscape in which capital of empire is being destroyed. Raiders have apparently entered the city from an invasion fleet. They are ravaging the inhabitants of the city and have destroyed the major river bridge. There is a headless statue in the foreground and, of course, the boulder-topped mountain is still visible from the earlier paintings. The sea raiders may have been inspired by the Vandal sack of Rome in 455. The original canvas is 63.5 inches wide and 39.5 inches high and is in the New York Historical Society.If you are interested in commissioning an oil painting on canvas of this art print, please send me an email attroy@trycap.com.