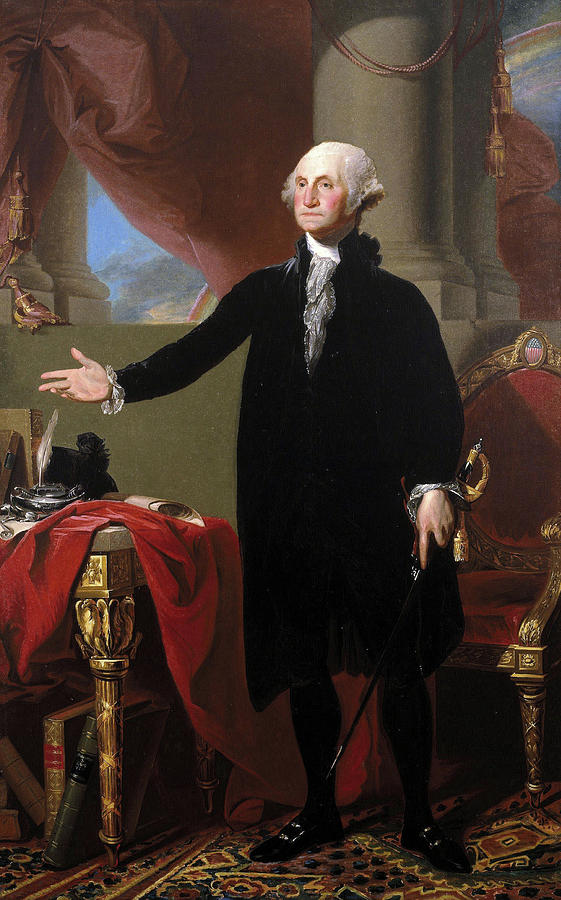 This is a reproduction of Gilbert Stuart's "Portrait of Washington" which was completed in 1797, two year’s before the president’s death. Gilbert Stuart portrayed George Washington several times in this stately, full-length English portrait format, known as the Grand Manner. Representing Washington in the classical pose of an orator (with arm extended), Stuart added a sword, symbolic of the first president’s military victories. The dramatic setting of columns and billowing drapery is typical of European Grand Manner portraits (in particular, a seventeenth-century French work by Hyacinthe Rigaud), but Stuart included American details such as the books leaning against the table leg. The added symbolism of the rainbow in the background referred to the era of peace following the Revolution, during Washington’s terms as president. . He was forty-two when he produced this masterpiece which was commissioned by William Kerin Constable. Stuart went on to become the foremost American portraitist and completed paintings of the first six American presidents. Originally from Rhode Island, he died on July 9, 1828. The original of this masterpiece measures 244.5 by 153 cm and is in the Brooklyn Museum in New York City.