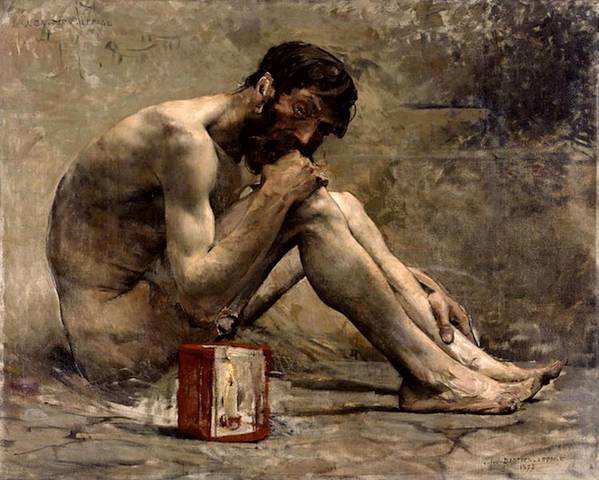 Diogenes art print by Jules Bastien Lepage.   Our art prints are produced on acid-free papers using archival inks to guarantee that they last a lifetime without fading or loss of color. All art prints include a 1" white border around the image to allow for future framing and matting, if desired.

This is a reproduction of Diogenes of 1873 by Jules Bastien-Lepage. This French artist was admitted to the Ecole des Beaux-arts in 1867 when he was... more

Congrats on your sale!!

This is a reproduction of "Diogenes" of 1873 by Jules Bastien-Lepage. This French artist was admitted to the Ecole des Beaux-arts in 1867 when he was nineteen. He fought in the Franco-Prussian War and in the year of this painting he became prominent receiving a commission to paint the Prince of Wales. He toured Italy and enjoyed great acclaim in western Europe. But his health failed and he died in Paris in 1884 at the age of thirty-six. This Diogenes captures the eccentricity of the naked philosopher. When Alexander met the philosopher who said, "if I were not Alexander, I shouild like to be Diogenes". The original masterpiece is in the Musee Marmottan Monet in Paris.If you are interested in commissioning an oil painting on canvas of this art print, please send me an email attroy@trycap.com.