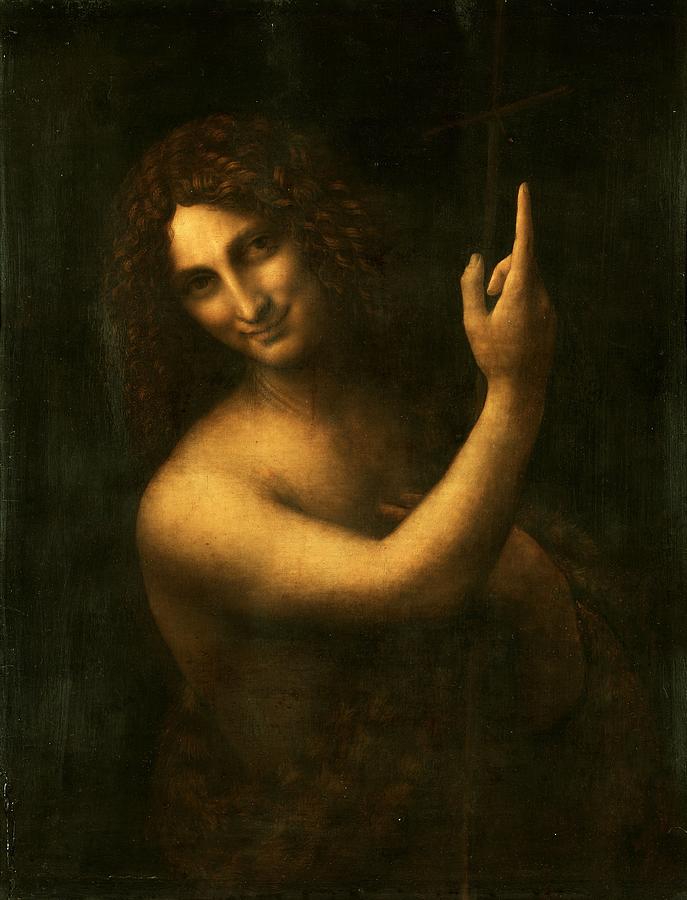 This is a reproduction of Leonardo da Vinci's masterpiece "St. John the Baptist" of 1516. This oil on walnut may have been Leonardo's last painting. The original dimensions were 69 cm high and 57 cm wide. It is currently on display at the Louvre in Paris. The figure of the Baptist shares the enigmatic smile of the Mona Lisa and he is dressed in skins. He points heaven-ward and carries a cross made of reeds. The cross and the skins may have been added by a later painter. It is thought that the dark background and the lighted face of the prophets alludes to the Gospel description of John as "a light that shines in the darkness". Leonardo was born on April 15, 1452, the natural son of a notary, in Vinci, a village not far from Florence. He studied under Verrocchio in Florence and worked for Ludovico il Moro of Milan and later in Rome, Bologna and Venice. His last years were spent in the service of Francis I of France where he died at Clos Luce on May 2, 1519. Though known primarily as a painter in his day, the contributions of Leonardo to all manner of the arts and science are legion and among many he is the personification of the true "Renaissance Man".

If you are interested in commissioning an oil painting on canvas of this art print, please send me an email to troy@trycap.com.

Congratulation on your recent sale!