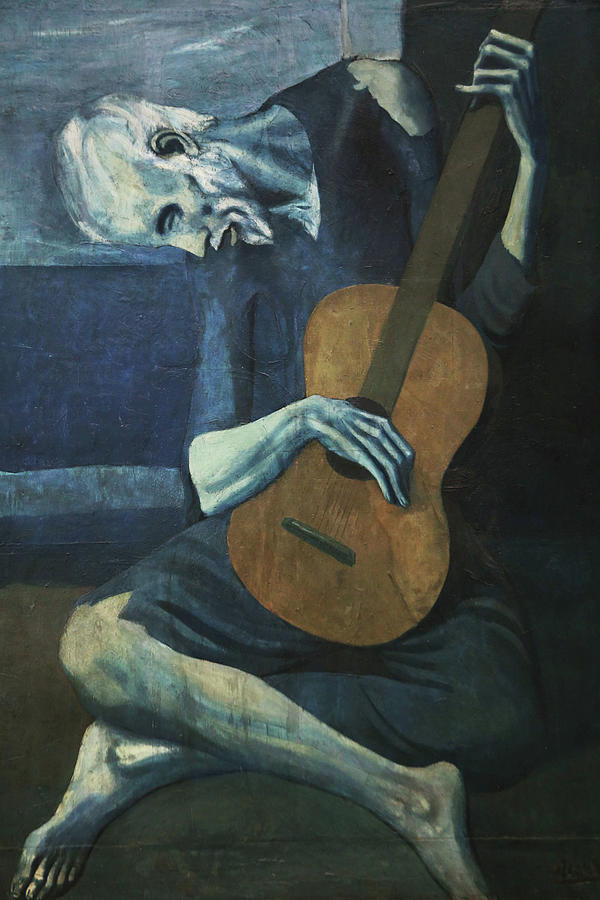 This is a reproduction of Pablo Picasso’s masterpiece “The Old Guitarist” of 1904. The artist created the work at the age of twenty-three in Barcelona having been born in Malaga, Spain. He was in his “Blue Period” which was brought on by his severe poverty and the suicide of his close friend Carlos Casagemas. The Blue Period is characterised by flat paintings dominated by blues, greys and black depicting melancholy figures apparently contemplating tragedy. the Blue Period was followed in 1904 by the Rose Period and, later, Cubism. Inn this painting, Picasso uses flat two-dimensionality to separate the guitarist from time and space. The theme is definitely melancholic and the use of oil heighens the theatrical mood of the piece. The subject is blind and shows little sign of life indicating that he may be close to death. The elongated figure of the man is reminiscent of El Greco and the central figure of the guitar may show the dependence of the artist on his medium for his very survival. Picasso went on to become a central figure in Twentieth Century Art and died on April 8, 1973. The painting is an oil on panel and measures 122.9 by 82.6 centimeters. It is in the Art Institute of Chicago.