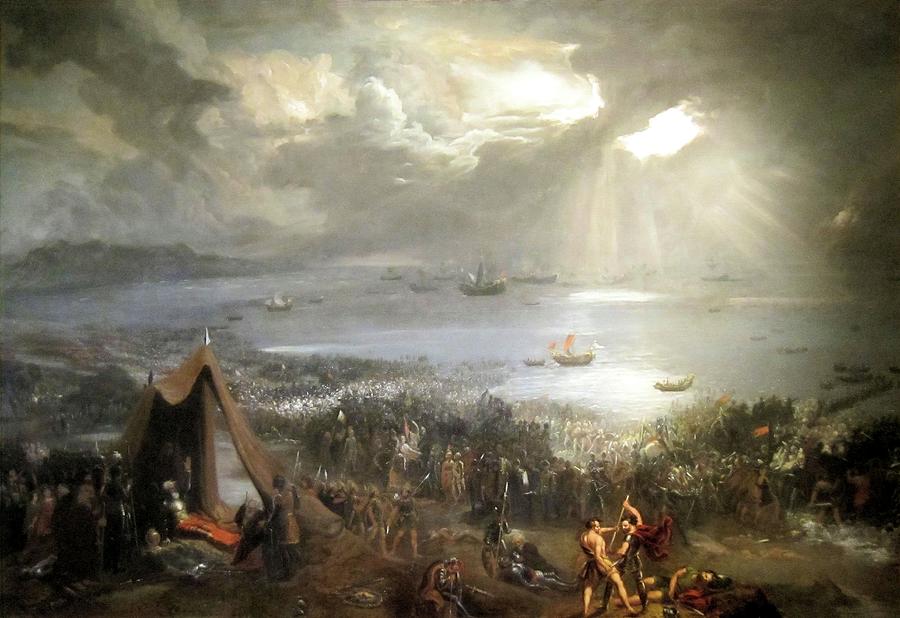 The Battle of Clontarf

The Battle of Clontarf

This is a reproduction to Hugh Frazer’s masterpiece “The Battle of Clontarf” of 1826. Frazer was born in Dromore, Ireland in 1795 and enrolled in the Dublin Society when he was seventeen years old. He exhibited in the Royal Hibernian Academy from 1826 to 1864. He was president of the Association of Artist of Belfast and became a member of the Hibernian Academy in 1837. Two years later he began his fourteen year career as a teacher there. He died in 1865. This monumental painting depicts the Battle of Clontarf which was fought on Eastern Sunday, 1015, April 23. Brian Boru, late in age, led a Gaelic collation against an army of Norse led by Sigtrygg of Dublin, Sigurd of Orkney, Braodir of Mann and Maelmorda of Leinster. It is regarded as the final victory of the native Irish over the Vikings who had settled in and near Ireland. The battle occurred near Dublin and, though the Viking forces and those of their Leinster were defeated and fled the field, Brian, his son and grandson were all killed which ended the O’Brien sovereignty over Ireland. The painting was long in the Isaacs Art Center in Hawaii.

One of my favorite historical battles. Congrats on the sale!