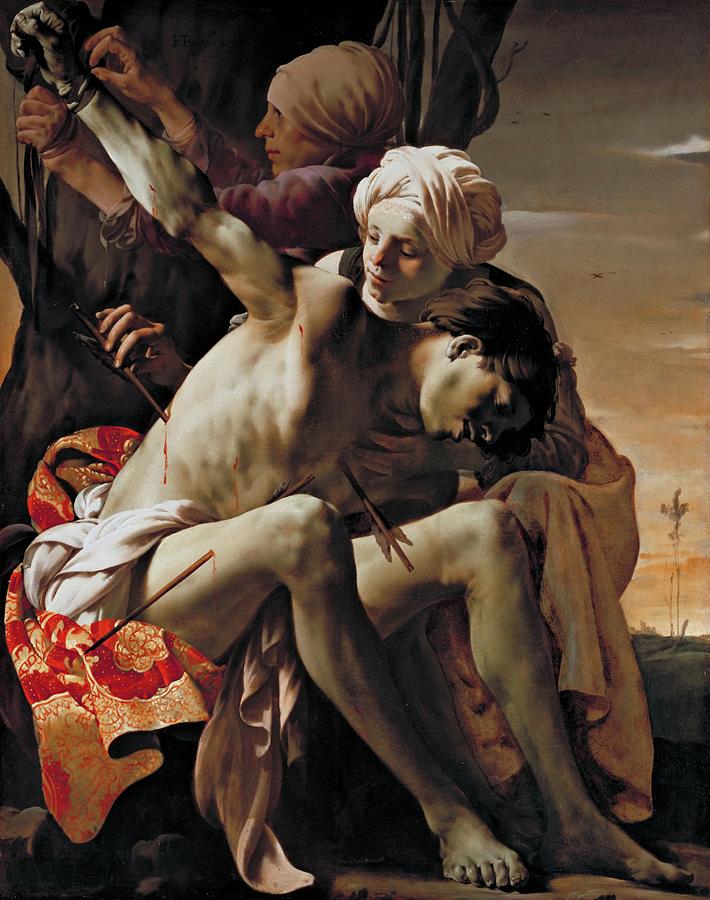 A reproduction of the masterpiece by Hendrick ter Brugghen, "St. Sebastian tended by St. Irene" of 1625. This work exemplifies Ter Brugghen's preference for close intimacy in his figures as well as a skillful use of odd, dramatic lighting effects. The legend of Sebastian and Irene became very popular in the seventeenth century partially as part of an effort to show the caring nature of Roman Catholicism and perhaps also due to Sebastian's being the patron of victims of the plague which was ravishing parts of western europe in the seventeenth century. This work is currently in the Allen Memorial Art Museum,oberlin, Ohio.

Hendrick ter Brugghen was a leading Dutch follower of the Italian Michelangelo Caravaggio. He was born in about 1588 and at an early age moved with his family to Utrecht. He was in Rome in 1604 where he was heavily influenced by Caravaggio asd well as Carracci, Domenichino and Reni. He favored half-length figures and strong contrasts between light and dark surfaces. Though he died early in 1629 at the age of 41, his influence was widespread in the next generation of Dutch Masters.

Art is unquestionably one of the purest and highest elements in human happiness. It trains the mind through the eye, and the eye through the mind. As the sun colours flowers, so does art colour life. -- Congratulations on your recent sale of this amazing Work!