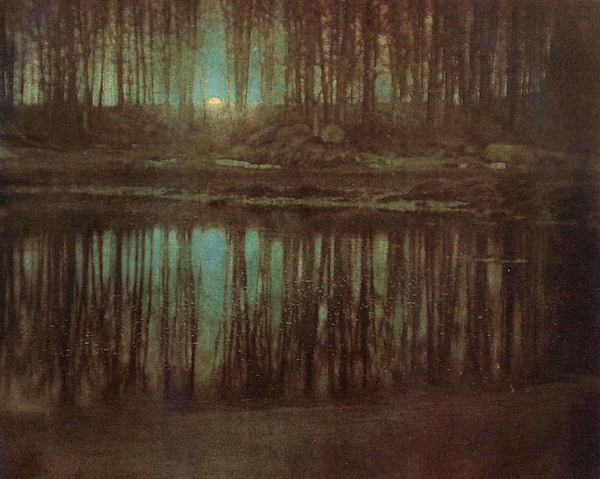 This is a reproduction of The Pond Moonlight of 1904 by Edward Steichen. This is the quintessential chromatic study of moonlight and was produced... more

Beautiful. Congratulations on your sale

Congratulations on your new sale

This is a reproduction of The Pond Moonlight of 1904 by Edward Steichen. This is the quintessential chromatic study of moonlight and was produced through using innovative techniques new to the first decade of the Twentieth Century. It ws taken in Mamaroneck, New York and was influenced by the Japanese woodcuts that were contemporaneously popular as well as Whisterâ€™s Nocturns. Steinchon was twenty-five in the year of this composition having been born in Luxemburg, but brought to America when still an infant. He became an American citizen in 1900. That same year he met Alfred Stieglitz which led to a creative collaboration that lasted for years. Steichen was a pioneer in color photography and broke new ground in fashion photography. He served in Word War I and in 1963 was presented with the Presidential Medal of Freedom. He died on March 25, 1973.If you are interested in commissioning an oil painting on canvas of this art print, please send me an email attroy@trycap.com.