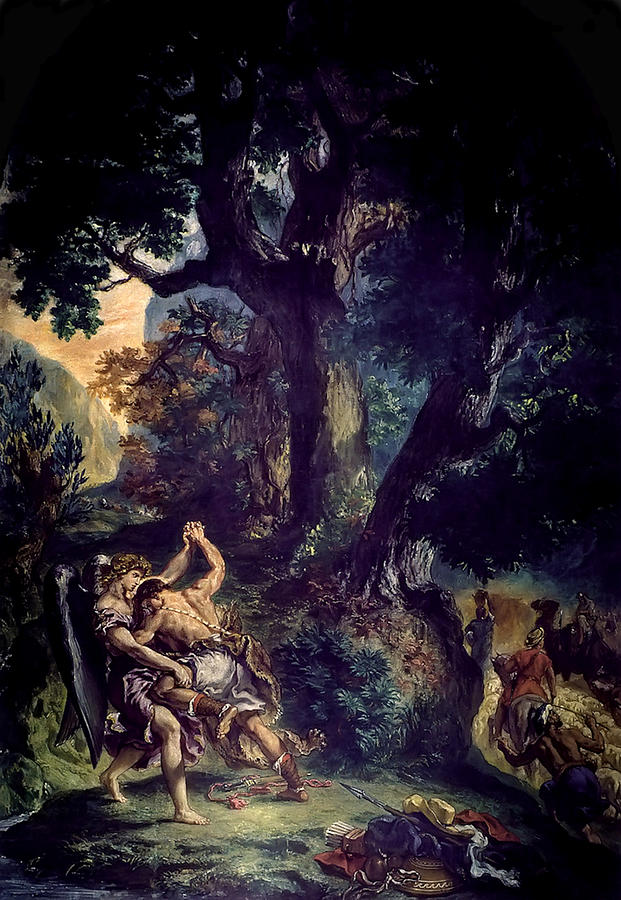 This is a reproduction of a Biblical masterpiece by Eugene Delacroix, "Jacob Wrestling the Angel". It was painted betweeen 1857 and 1861 and is in the church of Saint Sulpice in Paris. The image is obviously taken from the the 32nd chapter of the book of genesis: "And Jacob was left alone; and there wrestled a man with him until the breaking of the day. And when he saw that he prevailed not against him, he touched the hollow of his thigh; and the hollow of Jacob's thigh was out of joint, as he wrestled with him. And he said, Let me go, for the day breaketh. And he said, I will not let thee go, except thou bless me. And he said unto him, What is thy name? And he said, Jacob. And he said, Thy name shall be called no more Jacob, but Israel: for as a prince hast thou power with God and with men, and hast prevailed. And Jacob asked him, and said, Tell me, I pray thee, thy name. And he said, Wherefore is it that thou dost ask after my name? And he blessed him there. And Jacob called the name of the place Peniel: for I have seen God face to face, and my life is preserved." Eugene DelaCroix was a leading French Romanticist of the Nineteenth Century. He began his training as a Neo-classicist in 1815 when aged seventeen. He became a sensation seven years later and in 1824 enjoyed a great success with his "Massacre at Chios". In 1830 he produced his most famous painting, "Liberty leading the People", which definitely sets the artist apart from Neoclassicism. He was a founder of the National Society of Beaux-Arts and died shortly thereafter in 1863.