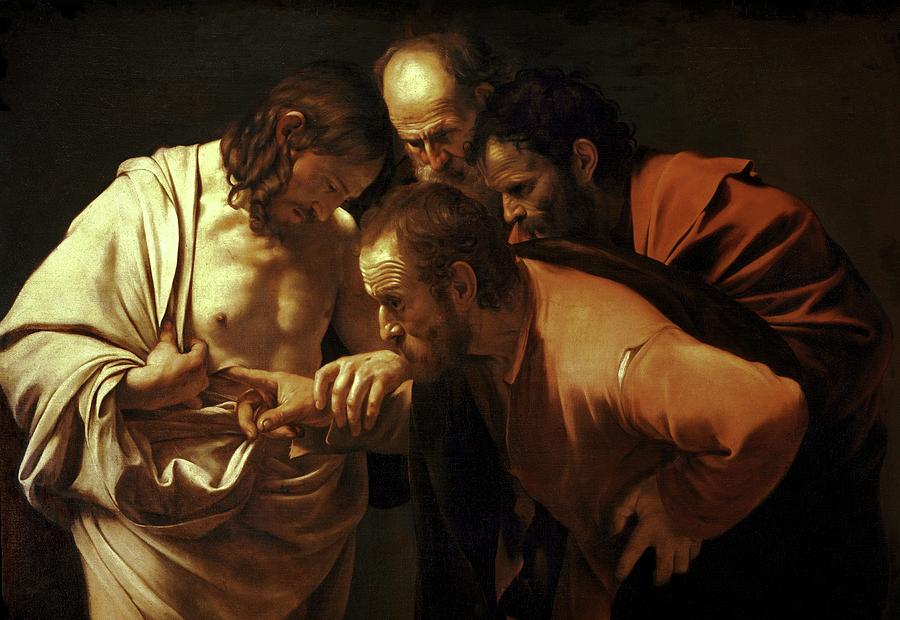 A reproduction of Michelangelo Caravaggio's "The Incredulity of Thomas" of about 1603. Michelangelo Merisi was born in Caravaggio, near Milan, in 1571 and from the age of thirteen he studied painting for four years. He went to Rome at twenty-one and became an associate of Cesare d'Arpino, an artist and art dealer. He secured his first patron, Cardinal Del Monte, who gained Caravaggio's first commission for side paintings in San Luigi dei Francesi in Rome. From 1600 he was constantly in trouble with the law for assaults and libels but he continued to secure important commissions. In 1606 Caravaggio was forced to flee Rome having been accused of murder. He spent time in Naples and Sicily and became a Knight of St. John in the latter in 1608. Before long he had to flee again after being imprisoned. He received a pardon from the Pope and was one his way back to Rome when he died at the age of thirty-nine at Porto Escole. In "The Incredulity of Saint Thomas" Caravaggio used darkened interiors and quite plebean looking characters as was his signature effect. The realism and richness of the dark colors lend an aura of accuracy regarding the human condition which rarely is approached by the other masters. The original of this masterpiece is in the Sanssouci, Potsdam, Germany.