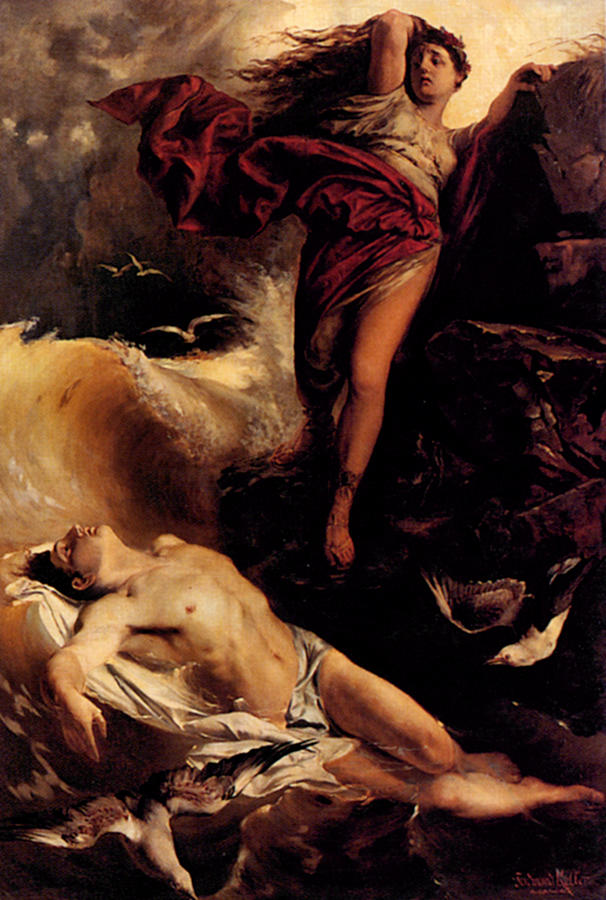 This is a reproduction of "Hero Finding Leander" by Ferdinand Keller. This is a depiction of the Byzantine myth of lovers separated by the Hellespont, the strait of water between Europe and Asia now known as the Dardanelles. Hero was a priestess of Aphrodite who lived in a tower at Sestos, on the European side. Leander was from Abydos on the Asian side. They became lovers in spite of Hero's vow of virginity to Aphrodite and through the summer Leander would swim from Asia to Europe guided by flames set in the tower by Hero. On a stormy night, Leander lost sight of the signal fire and was drowned. In despair, Hero threw herself from her tower and perished on the rocks. There have been repeated literary re-tellings by Ovid, Musaeus, Christopher Marlowe, George Chapman, and Sir Walter Raleigh. This painting is by Ferdinand Keller who studied in Karlsruhe, Germany and in Rome. After 1900 he was influenced by Bocklin to dwell on themes from ancient mythology including this masterpiece. He died in 1922 at the age of eighty.