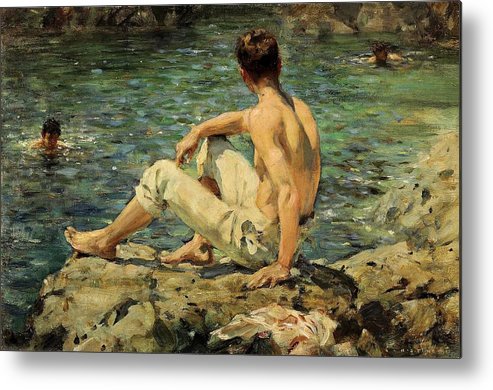 Green and Gold metal print by Henry Scott Tuke.   Bring your artwork to life with the stylish lines and added depth of a metal print. Your image gets printed directly onto a sheet of 1/16" thick aluminum. The aluminum sheet is offset from the wall by a 3/4" thick wooden frame which is attached to the back. The high gloss of the aluminum sheet complements the rich colors of any image to produce stunning results.

This is a reproduction of Henry Scott Tuke's masterpiece, Green and Gold of 1920. The original is an oil on canvas and is in a private collection.... more

Congratulations on your sale and nice artwork

­¤Æ¢­¤Æ¢­¤Æ¢ŌĆ£An art is a poem without wordsŌĆØ­¤Æ¢­¤Æ¢­¤Æ¢ Congratulations on your recent sale of this amazing Work!

This is a reproduction of Henry Scott Tuke's masterpiece, Green and Gold of 1920. The original is an oil on canvas and is in a private collection. Tuke's biding love was the sea. He was a member of the Royal Academy having been born in 1858 York from whence he moved when he was sixteen and entered the Slade School of Art. He traveled to Italy six years later nand between 1881 and 1883 he lived in Paris where he studied under Jean-Paul Laurens and met John Singer Sargent. During this time he met Oscar Wilde and John Addington Symonds. He began his painting in Cornwall in 1883 and his fame gradually grew. In 1914 he was elected to the Royal Academy of Arts having established himself as an independent artist who could afford to work in France, Italy and the West Indies. Tuke died in Falmouth, Cornwall at the age of seventy.If you are interested in commissioning an oil painting on canvas of this art print, please send me an email attroy@trycap.com.

Troy Caperton was born in San Antonio, Texas in 1949. Raised in South Louisiana from 1953, he graduated from Baylor University in 1976 and pursued a Masters in History at the University of Louisiana until 1988 when he moved to Austin, Texas. For over ten years Caperton has been selling his original art and reproductions of original work and the masters through various portals on the Internet. One of his works won a JurorÆs Prize at AustinÆs Art Erotica in 2010. He has always been employed in helping positions and continues to produce works for the enjoyment of the public.