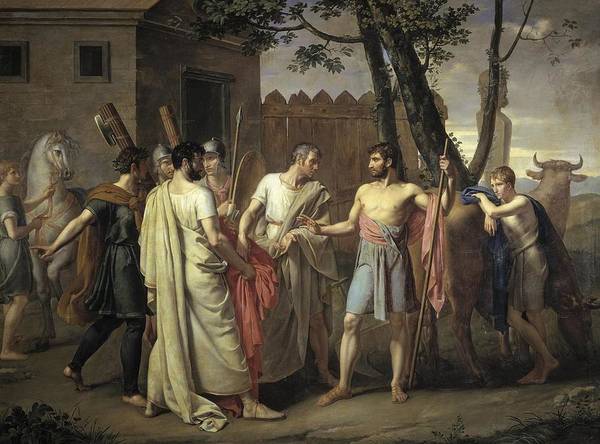 Cincinnatus Abandons the Plow poster by Juan Antonio Ribera.   Our posters are produced on acid-free papers using archival inks to guarantee that they last a lifetime without fading or loss of color. All posters include a 1" white border around the image to allow for future framing and matting, if desired.

This is a reproduction of Cincinato abandona el arado para dictar leyes a Roma by Juan Antonio Ribera of 1806. This is a pivotal scene from the... more

Congrats on your sale!

This is a reproduction of " Cincinato abandona el arado para dictar leyes a Roma " by Juan Antonio Ribera of 1806. This is a pivotal scene from the history of the early Roman Republic. At the urging of his countrymen during an existential crisis, Cincinnatus unwillingly abandons his simple farm to take up command of the Roman Republic. The constitution of the early democracy had a provision for one man to take total control of the state and this burden Cincinnatus took up. Ribera was twenty-seven when he produced this masterpiece which is a fine example of his Neoclassical style. He studied in Paris under David and in 1811 became court painter to the exiled Charles IV of Spain. He continued as court painter under Ferdinand VII and Isabella II and directed what became the Museo del Prado for three years before his death in Madrid in 1860.If you are interested in commissioning an oil painting on canvas of this art print, please send me an email attroy@trycap.com.