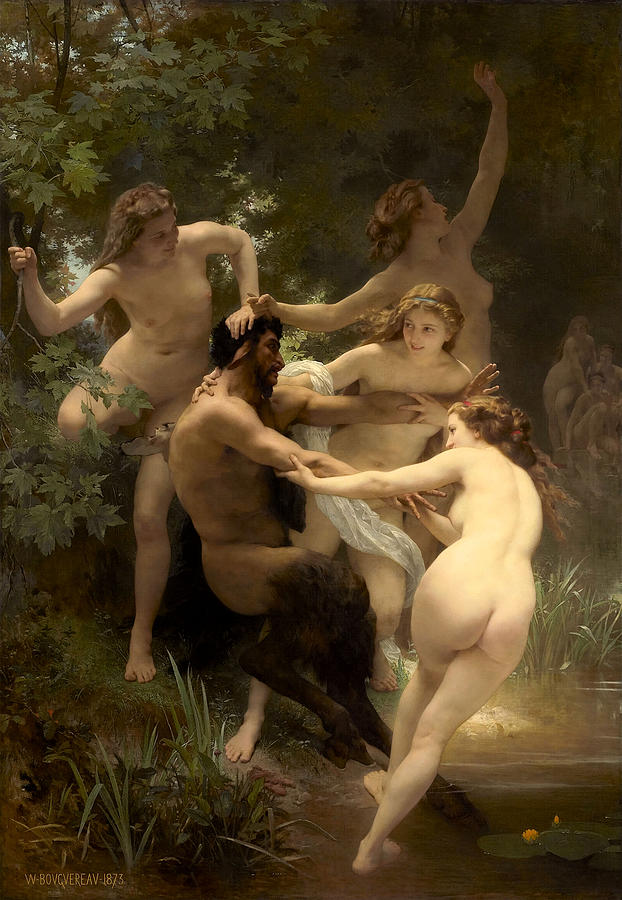 This Academic masterpiece was produced in 1873 when Bouguereau was forty-eight years old. In its original exhibition verses from the roman poet Pulbius Statius accompanied it: “Conscious of his shaggy hide and from childhood untaught to swim, he dares not trust himself to deep waters.” The artist had entered the Ecole des Beaux-Arts at the age of twenty-one. He was well established in a very successful career which had taken flight in 1850 when he won the Prix de Rome. He exhibited annually in the Paris Salon for his entire career thereafter and was known for his contemporary visions of classical subjects from history and mythology. He was heavily influenced by the Italian Renaissance masters and notably by Raphael. By the 1860’s his fame spread to England and he was able to purchase a large home in Paris. He was staunchly conservative and began teaching in 1875. He was also a strong supporter of female painters which was considered quite radical in his day. He died in the city of his birth, La Rochelle at the age of seventy-nine in 1905. The American John Wolfe purchased this painting and displayed it in his mansion. Sold in 1888, it was displayed in the bar of the Hoffman House Hotel in New York City until 1901 when it was stored in a warehouse as being offensive. Robert Sterling Clark discovered and acquired it in 1942. It is currently on display in the Clark Art Institute in Williamstown, Massachusetts.