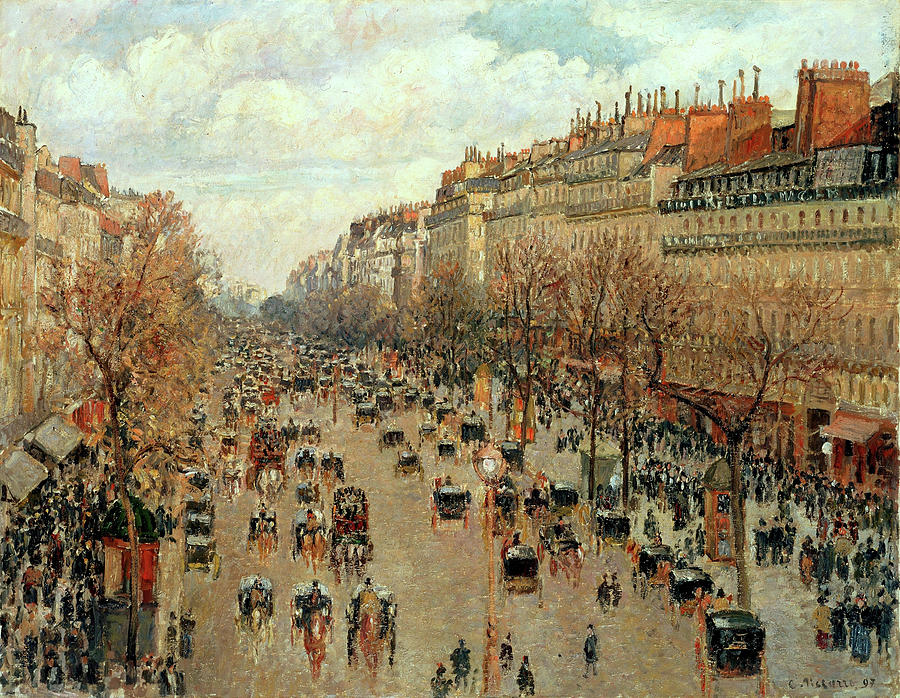 This is a reproduction of Camille Pissarro’s Impressionist masterpiece of 1897, Boulevard Montmarte. This is one of sixteen paintings he made of the boulevards that he could view from the Grand Hotel de Russie. This oil on canvas painting measures 29.1 by 36.5 inches and is in the Hermitage Museum in St. Petersburg, Russia. Pissarro was sent from his native Virgin Islands to boarding school in France when he was twelve years old in 1842. He was introduced to drawing while there and returned to St. Thomas five years later to work in the family business as a cargo clerk. In 1851 he turned to painting as a career and went to Venezuela. After drawing everything he could, he returned to Paris in 1855 and attended various classes in a number of venues. His first painting was accepted at the Salon of 1859 and during his studies he became friends with Monet and Cezanne. He married in 1871 and moved to London due the Franco-Prussian War as he was a Danish citizen. There he met Paul Durand-Ruel who became his primary art dealer and helped Pissarro to become a financial success. He returned to France in 1872 and consciously launched the Impressionist movement with his friends Cezanne, Monet, Manet, Renior and Degas. He went on to pioneer Neo-Impressionism as well as the abandonment of it. He died on November 13, 1903 in Paris.